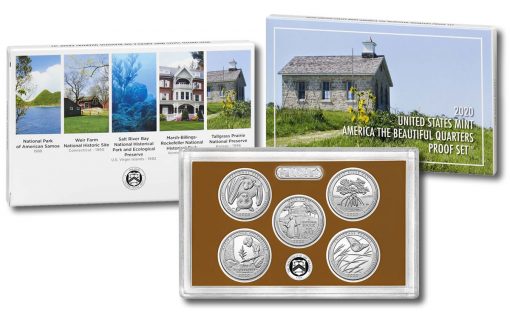 The United States Mint continues its America the Beautiful Quarters® Program, a series nearing its close, with today’s release of a proof set that showcases five different coin designs.

Each of the set’s quarters was produced at the San Francisco Mint and carries the facility’s ‘S’ mintmark. The five coins bear reverse (tails side) designs emblematic of the following locations:

The national sites depicted on this year’s quarters represent the fifty-first through fifty-fifth in America the Beautiful series. The U.S. Mint program debuted in 2010 and has seen five coin designs annually. It will end next year with one final design. At that time, a site will have been honored from each of the fifty states, the District of Columbia and the five U.S. territories.

All program coins share the same obverse (heads side) portrait of George Washington. The John Flanagan effigy first appeared on the 1932 circulating quarter dollar and has been on the coin, with a few changes, ever since.

The set’s proof coins are created from burnished blanks that are struck multiple times by polished dies to achieve a greater level of detail than found on circulating coins. They are especially noted for their sculpted, frosted foregrounds and mirror-like backgrounds.