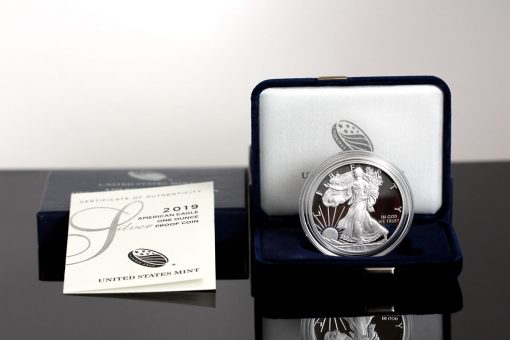 The United States Mint just released its 2020-W Proof American Silver Eagle. This .999 fine silver coin is destined to become one of its best sellers for the year.

Demand is always strong for this annual release with hundreds of thousands sold every year. Collectors grabbed 218,990 of last year’s edition in the first four days of sales. More than 400,000 have now sold altogether.

The cover photo shows last year’s 2019-W Proof Silver Eagle, its blue velvet, satin-lined presentation case, packaging and certificate of authenticity. This year’s coin looks the same, aside from its 2020 date, and has the same style packaging, case, and cert.

Lady Liberty, which appears on the obverse (heads side) of every coin, was originally designed by Adolph A. Weinman for the 1916-1947 half dollar coin. Inscriptions around the walking figure read LIBERTY, IN GOD WE TRUST and 2020 for the year of issue.

The reverse (tails side) of each coin also bears a design familiar to collectors as it has been on American Silver Eagles since their 1986 debut. It is a heraldic eagle with a shield as designed by John M. Mercanti. The eagle’s beak holds a banner reading E PLURIBUS UNUM.

Other reverse inscriptions include the UNITED STATES OF AMERICA, 1 OZ. FINE SILVER and the face value of ONE DOLLAR. A ‘W’ mintmark indicates its production at the U.S. Mint’s facility in West Point.