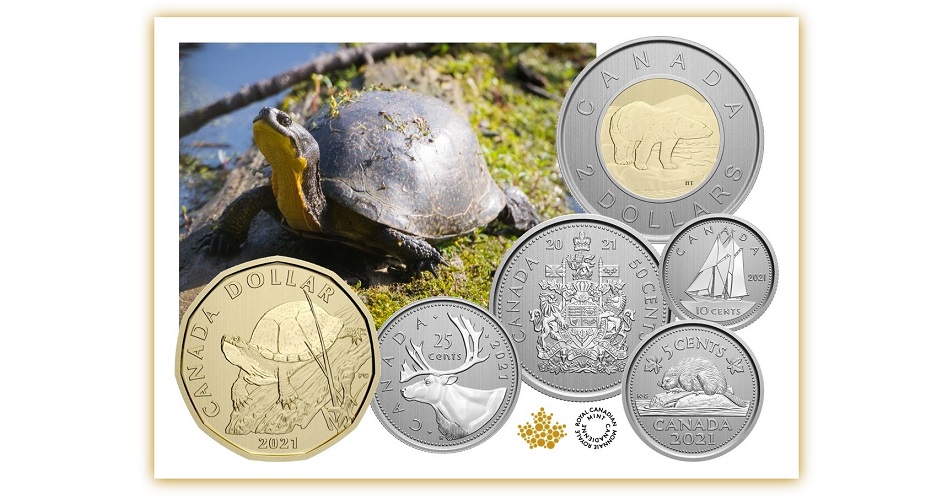 The Royal Canadian Mint has released the second collection in their multi-year “Endangered Species” six-coin Specimen set series. As with last year’s set, the exclusive one-dollar coin has been dedicated to raising awareness about wildlife conservation and species recovery efforts in Canada. This year’s Specimen set of “Endangered Species” includes a depiction of Blanding’s turtle (Emydoidea blandingii). It is the first time a reptile has been featured on the annual Specimen set’s dollar coin.

Designed by Canadian artist Pierre Girard, the exclusive Specimen $1 coin features a single Blanding’s turtle sunning itself on a log in its wetland habitat. The text partly around the primary design reads CANADA DOLLAR with the year of issue 2021 placed directly underneath. The obverse features the effigy of Her Majesty Queen Elizabeth II designed by Susanna Blunt. All six coins feature a Specimen brilliant and frosted relief finish over a lined Specimen background. The Royal Canadian Mint is the only mint worldwide to offer an annual set in this particular Specimen finish. The Specimen set is presented in an elegant book-style packaging that complements all six denomination coins, five cents to two dollars, in circulation. At the same time, the removable case allows you to display and view your coins with ease.