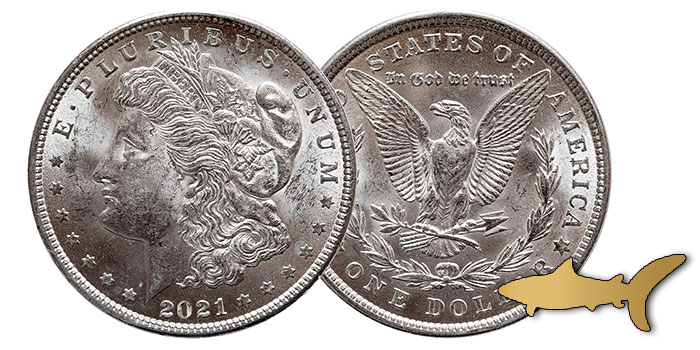 But on March 11 a new approach to doing this was proposed by Rep. Andy Barr (R-KY06), the 1921 Silver Dollar Coin Anniversary Act (H.R. 6192), which if enacted would result in the issuance of 2021-dated Morgan and Peace silver dollars to mark the centennial of the transition in 1921 from the Morgan dollar to the Peace dollar series. Those coins would not be commemoratives but would be legal tender silver coins issued beginning January 1, 2021, that contain at least 90% silver.

Although some media reports have suggested this would be a bullion program that would parallel the American Silver Eagles series, the Mint does not currently have any plans to create an ongoing program of coins issued after 2021. However, the bill’s language is intentionally broad in order to give the United States Mint flexibility. It is possible, for example, that rather than issue the coins each year from 1921, they might be issued every 10 years for the 110th anniversary, etc.

The legislation, which is the brainchild of Thomas Uram, current chairman of the Citizens Coinage Advisory Committee (CCAC), and CCAC member and numismatic author Michael Moran, proposes the striking of Morgan silver dollars at the Denver, Philadelphia and San Francisco Mints with mint marks; other Morgan dollars with Carson City and New Orleans privy marks in tribute to the coins once made at those mints; and high-relief Peace dollars struck at the Philadelphia Mint. There may also be medals with the designs of famous George T. Morgan patterns like the Schoolgirl dollar and others. Details like mintages, finishes and pricing are not yet known.

Thomas Uram recently said that the Mint strongly supports this proposed coin program and that it has been estimated that it could generate as much as $31 million in revenue. He also noted that currently there are efforts to put together a companion Senate bill to the House bill that has been introduced and which has 17 original co-sponsors.

Unlike commemorative coin bills that require two-thirds of each congressional body to co-sponsor them, this bill could pass with a simple majority. The COVID-19 pandemic and economic recovery have been the main focus in Congress for months, but as the country starts to open up, the Silver Dollar bill will hopefully move forward.

If you as a collector support the issuance of 2021 Morgan and Peace dollars, be sure to contact your congressional representative and ask them to support the bill.

The transition from Morgan to Peace dollars was a key moment in American history.

The Morgan dollar symbolized the country’s westward expansion and industrial development in the 19th century, while the Peace dollar symbolized our coming of age as an international power. For this reason, the coins had very different motifs – in particular of Lady Liberty and the American Eagle.

In 1918 the Pittman Act called for the melting of 270 million Morgan silver dollars to help prop up the price of silver. The legislation also called for the series, which saw its last coin in 1904, to be resumed for a year in 1921 to back silver certificates that had been issued. Tens of millions of coins were struck, with estimates of 10-15 million surviving examples of 1921, 1921-D and 1921-S coins.

The 1921 Morgan silver dollar has a flatter and shallower appearance than prior coins in the series because the model used for the dies made some adjustments to an 1878 coin and was done in flatter relief. As a result, it is difficult to find well-struck examples of this date.

The 1921-D and 1921-S coins are more expensive in each grade, especially the higher-end BU coins. And proof-like and deep proof life coins are even more scarce.

The Pittman Act also authorized a new silver dollar of unspecified design. Legislation passed in May 1921 called the new coin a “Peace Dollar” that would be issued to honor the armistice treaties that ended World War I. It is the only coin ever issued specifically to celebrate peace, and the image of Liberty on the obverse, which was partly inspired by the artists’ wife, bears a strong resemblance to the Statue of Liberty.

The original reverse design included a broken sword, which the coin’s designer Anthony de Francisci added as a symbol of peace in addition to the olive branches that the eagle clutches (which notably were not paired with arrows as on many U.S. coins). But some people interpreted the sword as representing defeat, so it was later removed by hand from the dies. Production was delayed until the end of the year, and the coins only entered circulation in early 1922.

For numismatists, the 1921 coin is also a major type issue because it is the only classic U.S. silver coin that was struck in high relief and is the first issue of the series that was issued in relatively low numbers. Well-struck examples are prized because they are so hard to find, and because of the pressure required to strike the coins the dies kept breaking during production, and only a little over one million coins were made. The only solution was to lower the relief of Peace dollars, which was done starting with the 1922 coins.

Circulated examples of the 1921 Peace dollar can be obtained for under $200, while uncirculated examples start at about $300 and go all the way to almost $90,000 for the top grade of MS67. MS63 coins that run about $500 are very popular, but not all coins in the same grade have the same strike, so cherry-picking is important.

After all the production problems with the 1921 Peace dollar because of its high relief, production was ramped up greatly with the 1922 coin to help meet the provisions of the Pittman Act, resulting in a mintage of over 50 million 1922 coins – the highest for the series.

The 1922 Peace dollar is a popular coin for those seeking an attractive, well-struck uncirculated example, which can be had for under $40.

As the last issue of the Morgan series and the first of the Peace series, 1921 Morgan and Peace dollars will always be sought by collectors. Next year we may be able to see both coins struck using modern, advanced minting technology, which will also mean the first-ever MS70 and perhaps PF70 examples of these iconic coins.