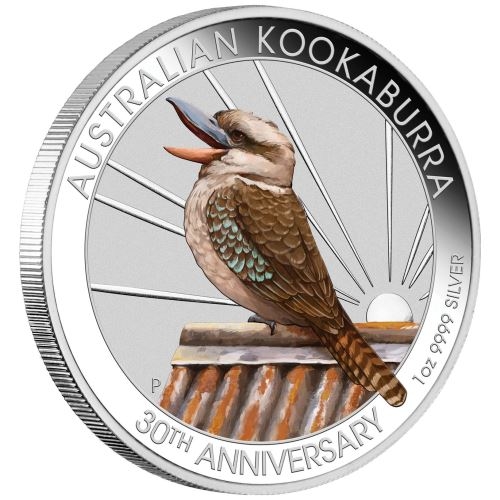 Marking the 2020 World Money Fair to be held between the 31st of January and the 2nd of February, The Perth Mint has released an exclusive coin show special celebrating the 30th anniversary of the Australian Kookaburra Bullion Coin featuring the 2020 Australian kookaburra design in vivid color.

Each coin is struck by The Perth Mint from 1oz of 99.99% pure silver and is issued as legal tender under the Australian Currency Act 1965.

The Perth Mint will release no more than 1,500 of the Australian Kookaburra 2020 1oz Silver Colored Coin in special World Money Fair 2020 packaging.

The coin’s reverse depicts a colored representation of a kookaburra perched on a roof at dawn with stylized rays of light in the background. Also included in the design is the inscription ‘AUSTRALIAN KOOKABURRA 30TH ANNIVERSARY’, The Perth Mint’s ‘P’ mintmark, and the weight and purity.

The obverse bears Stuart Devlin’s depiction of a kookaburra on a tree stump surrounded by native foliage, as it appeared on The Perth Mint’s 1990 Australian Kookaburra Silver Bullion Coin. Also included is the Jody Clark effigy of Her Majesty Queen Elizabeth II, the inscription ‘1990 2020’, and the monetary denomination.