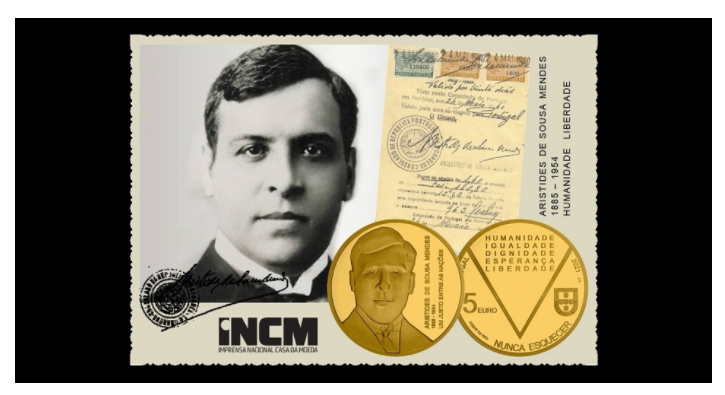 The Imprensa Nacional Casa da Moeda (INCM) have released new commemorative gold, silver, and base metal coins that honour the man who is remembered as having saved the lives of tens of thousands of men, women, and children during the Second World War. Aristides de Sousa Mendes (1885-1954) was working during the outbreak of fighting in Europe as a Portuguese diplomat who defied the policies of his government by issuing transit visas to civilians fleeing occupation and certain internment in concentration camps. Stationed and serving as Portugal’s consul in Bordeaux, France, in 1940 it was here where he personally signed thousands of visas to refugees fleeing the Nazi advance. He is estimated to have saved more than 30,000 people, including 10,000 Jews.

Those fleeing southward just ahead of advancing armies from the Third Reich were doing so in the hope of exiting France via the only remaining avenue of escape, the southern border into Spain and Portugal. Many families had planned to sail for America but their hopes were dashed when Portugal’s president, António de Oliveira Salazar, permitted only holders of visas for overseas transit through Portugal, closing the borders to refugees without visas. Those desperately trying to obtain the piece of paper that would extricate them from France turned to Sousa Mendes, a devout and good-hearted Catholic, who decided to help the refugees despite his government’s orders. He promised local Jewish religious leaders to issue transit visas to everyone in need, adding that those who could not pay the fees would receive them at no charge. He then set up an improvised office in the consulate and, with the help of two of his sons, began to issue hundreds of transit permits daily. Unfortunately, the news of Sousa Mendes’s actions reached Lisbon, who summarily ordered him to return to his homeland at once. Having returned to Portugal in June 1940, Sousa Mendes was tried on 15 charges including violating Portugal’s prohibition on visas for Jews and other stateless people. He was found guilty, with the Portuguese Government dismissing Sousa Mendes from his position in the Foreign Ministry, leaving him unable to support his large family. During the proceedings, he declared:

I could not differentiate between nationalities as I was obeying the dictates of humanity that distinguish between neither race nor nationality, the true value of the Christian religion is to love one’s neighbour.

The man, who, after his death, had been described and compared to German industrialist Oskar Schindler, who saved Jews by employing them in his factories in Poland, was posthumously vindicated by the Portuguese Government. The Insubordinate Consul, as he was accused of being, had finally received a formal apology in 1988. In 1966, Sousa Mendes was the first diplomat to posthumously receive a special recognition by the State of Israel: He who is Righteous Among the Nations. This title is conferred on behalf of the Yad Vashem Holocaust Museum in Jerusalem to non-Jews who risked their lives to save Jews during the Holocaust. In June 2020, Portugal’s parliament unanimously decreed to bestow the honour of a monument to Sousa Mendes, which will be located in the National Pantheon, a former church. The inscription on the monument will read “A moral legacy for all, his heritage is for the whole of civil society and above all a virtuous example for future generations.”

Aristedes de Sousa Mendes died on the 3rd April 1954 at the age of 68 years and was laid to rest in Lisbon. Many of his children had emigrated to other countries after the war at the behest of their father to escape the financial deprivation and blacklisting the family suffered by the activities of Sousa Mendes years earlier.

The design, which is shared across all options, is the work of graphic artist José Viriato. The obverse side of the coin depicts a front-facing image of de Sousa Mendes that is based on an actual photograph taken of him when he was in his early 20s. To the right of the portrait is the text in a vertical direction ARISTEDES DE SOUSA MENDES 1885 – 1954 UM JUSTO ENTRE AS NACOES (“Righteous among the nations”).

The reverse side includes words of inspiration within a V shape HUMANIDADE IGUALDADE DIGNIDADE ESPERANÇA LIBERDADE (“humanity, equality, dignity, hope, freedom”). Below the primary design is the text NUNCA ESQUECER (“never forget”) with the denomination of 5 EURO placed to the left and the Portuguese crest placed on the right. The year of issue 2021 is placed along the upper-right edge.

Both the gold and silver Proof quality coins are each encapsulated and presented in a custom case made of a natural cork base and a Perspex cover accompanied by a certificate of authenticity. For additional information about these coins and others available from the INCM, please visit their website