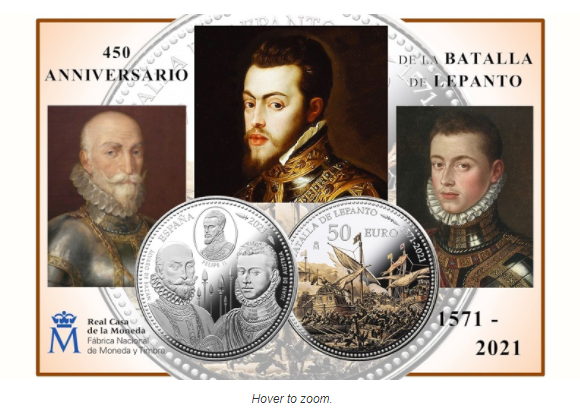 The Fabrica Nacional de Moneda y Timbre — Real Casa de la Moneda has released (19th July) two new silver Proof with colour coins marking the 450th anniversary of one of the most decisive naval battles to have been fought towards the end of the Renaissance. The conflict saw engagement in the Mediterranean between forces loyal to the pope and Catholic Europe against the encroaching Ottoman forces intent on acquiring more territory in Europe. The facilitator for this particular conflict was the Ottoman Empire’s Selim II, and his invasion of Cyprus in September 1570 — then the protectorate of Venice. With the threat of further European territory coming under the rule of the Ottomans and especially after the fall of Constantinople in 1453, a constant concern for Western Europe lay to the East unless military strength and unity could deter further aggression.

After Selim II invaded Cyprus, Pope Pius V convinced the powers of Venice, France, and the Holy Roman Empire to join forces as The Holy League. Pius V also persuaded King Philip II and Spain to join the offensive and defensive alliance with Don Juan de Austria, Philip’s younger half-brother, as commander-in-chief. Also commanding part of the Spanish fleet was Álvaro de Bazán, First Marquess of Santa Cruz, a Spanish admiral who had never been defeated in battle during his long naval career. The combined fleets assembled at Messina in Sicily and sailed in September 1571 for Corfu. It was there where the fleet learned that Famagusta had fallen and that Selim II’s fleet was in the Gulf of Patraikos, near Lepanto, present-day Návpaktos in Greece.

On the 7th October 1571, more than 400 galleys and almost 200,000 men fought in a battle in the Ionian Sea, in the south of Greece, between the Ottoman navy and a coalition of Catholic Christian states which included 60,000 men, 40,000 sailors and oarsmen, 20,000 soldiers, 206 galleys, and 6 galleasses. Despite the fact the opposing side was greater in terms of numbers, the Holy League was better equipped, motivated, and trained, resulting in a decisive victory for the united European forces. The battle was remarkable as it was the last and greatest engagement with oar-propelled vessels and the first great victory over an Ottoman Turkish fleet.

News of the victory reached Pius V on the 22nd October, but before the Holy League alliance was able to cement a permanent defence against further Ottoman encroachment on Europe, he died in May 1572. The result of this was the break-up of the Holy League and Venice ultimately ceding Cyprus over to the Ottomans. Sadly, the battle had little lasting impact on Ottoman expansion, but it exerted a great effect on European morale by lessening Ottoman confidence and permanently affecting their military superiority in Eastern Europe. The battle would be remembered and celebrated as the first significant victory for a Christian naval force over an Ottoman Turkish fleet and was the climax of the age of galley warfare in the Mediterranean.

€10 — eight reales. The reverse side of this coin depicts a colour an image of the galley commanded by Juan de Austria, called the GALERA REAL (“The Royal Galley”), and was the flagship of the Holy League. This galley was built in the shipyards of Barcelona in 1568 and it was the largest galley of its time. Above the name of the galley is the text BATALLA DE LEPANTO, with the commemorative years 1571 and 2021 placed to the right of the ship. The denomination of 10 EURO is shown below the image. The obverse of the coin includes an effigy of HM King Felipe VI with the year of issue 2021 placed below the King’s likeness.

€50 — cincuentin. The reverse side depicts a scene from the battle which is based on a lithography made by Vicente Urrabieta, and is displayed at the National Library in Madrid. Above the colour image is the commemorative text BATALLA DE LEPANTO 1571–2021. Just below is the coin’s denomination of 50 EURO. The obverse side of the cincuentin includes an encircled image of Spanish King Phillipe II. To his left is an image of Don Alvaro de Bazan, commander of the Holy League. To the right is an image of Don Juan de Austria, commander of the Spanish vessels. Both images are based on historic paintings. Between both commanders are six pikes, or pole spear-like weapons expertly used by Spanish troops.

Each coin is encapsulated and presented in a custom branded case accompanied by a numbered certificate of authenticity. Both coins are available as separate purchases. For more information about these coins and others available from the FMNT — Real Casa de la Moneda