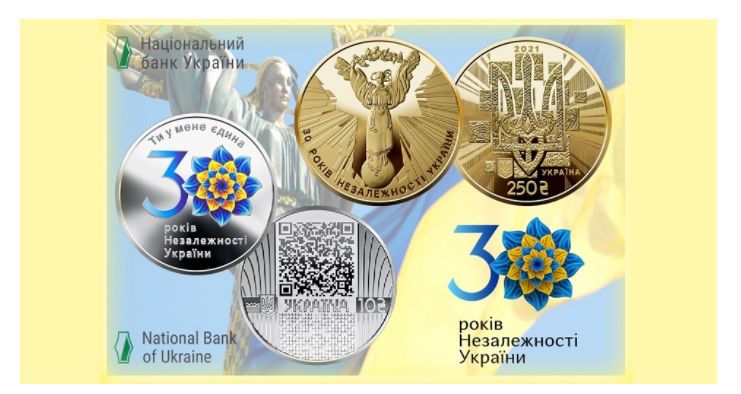 The National Bank of Ukraine has released (17th August) new gold and silver collector dedicated to a fateful event that took place 30 years ago. During the 20th century, and after the collapse of the Russian Empire with the abdication of its last Czar, a fledgling Ukrainian state emerged — albeit for a short time, lasting until the end of the First World War. With the disintegration of the former Soviet Union, it became apparent to many countries, those comprising the USSR, that an opportunity to declare, for the first time (or re-establish), their independence was close. For Ukraine, the path to a free and independent state began on the 16th July 1990, when the Verkhovna Rada national assembly in the country’s capital of Kyiv adopted the now-historic Declaration of State Sovereignty of Ukraine — essentially full independence from Moscow. It would not be until the 24th August 1991, when the Verkhovna Rada and soon-to-be-defunct communist Ukrainian Supreme Soviet presidium proclaimed that Ukraine would no longer follow the laws of the USSR, and only those of the separate Ukrainian SSR. As such, this was a de-facto declaration Ukraine’s independence from the Soviet Union.

On the 1st December 1991, Ukrainian voters overwhelmingly approved a referendum formalising independence from the Soviet Union with over 90% of Ukrainian citizens voting for independence. The referendum also passed with majorities in every region, including 56% in Crimea, whose demographic was comprised of 75% ethnic Russians. The Union of Soviet Socialist Republics formally ceased to exist on the 8th December 1991 when the presidents of Ukraine, Belarus, and Russia, three of the four remaining states who were original founding members of the USSR met in the town of Viskuli, Belarus, to formally dissolve the Union in accordance with the Soviet Constitution. With finality, on the 26th December 1991, the USSR was self-dissolved by the Council of the Republics of the Supreme Soviet of the Soviet Union, and, with this act, Ukraine’s independence was formalised de jure and recognised by the international community.

Today, Ukraine, as the second-largest country in Europe, is an independent state of more than 41 million people, making it the eighth-most populous country on the continent. A new constitution was adopted and ratified at the fifth session of the Verkhovna Rada on the 28th June 1996. Divided into 15 chapters, the constitution grants authority to the president who is the guarantor of the state’s sovereignty and also serves as commander in chief and formal head of state. Legislative authority is vested in an elected parliament led by a prime minister who is Ukraine’s head of government and presiding over the Cabinet of Ministers. Judiciary is vested in the Ukrainian Constitutional Court that is the sole body of constitutional jurisdiction in Ukraine. The Constitutional Court interprets the Constitution of Ukraine and is headed by a Chairman appointed by the president.

The gold and silver Proof-quality coins are produced by the Mint of Ukraine at their facilities in Kyiv and on behalf of the National Bank.

10 grivnia — silver: Designed by graphic artists Vladimir Taran, Alexander Haruk, and Sergey Haruk, the obverse side of the silver coin depicts the numeral 3, which is shown next to a full colour stylised multi-petal flower designed with alternating rows of deep blue and yellow petals — signifying Ukraine’s national colours, with the numeral 3 and flower together representing the number “30”. Above the centred primary feature is the commemorative inscription ТИ У МЕНЕ ЄДИНА (“you are the only one”) placed above. Arranged below the centred design is a further commemorative inscription РОКІВ НЕЗАЛЕЖНОСТІ УКРАЇНИ (“30 years Independence Ukraine”).

The reverse side features a working QR code that takes the scanner to a Youtube video highlighting the independence anniversary. Below the code is the digitalised text УКРАЇНА (“Ukraine”), to the left of which is the year of issue 2021 along with a small state emblem of Ukraine. To the right side of the code is the coins’ denomination represented with the Grivnia symbol and numeral 10 ₴. Below the code and digitalised text is a stylised pattern image replicating traditional Ukrainian embroidery elements.

250 grivnia — Gold: Designed by graphic artists Vladimir Taran, Alexander Haruk, and Sergey Haruk, the obverse side of the gold coin features a detailed portion of Ukraine’s Monument of Independence. Built by sculptor Anatoliy Kushch to commemorate the 10th anniversary of the independence of Ukraine in 2001, it is topped with the allegorical female figure known as Berehynia holding a guelder-rose bowed branch above her head. Below the primary design is the inscription 30 РОКІВ НЕЗАЛЕЖНОСТІ УКРАЇНИ (“30 years Independence Ukraine”) along the lower edge.

The reverse side depicts a mosaic image of the historic trident insignia of the Princely State of Volodymyr the Great — the symbol represents the process of state formation, which contributes to the consolidation and development of the Ukrainian nation, its historical consciousness, traditions, and culture. Above the stylised trident is the year of issue 2021 with the denomination of 250 ₴ placed below.