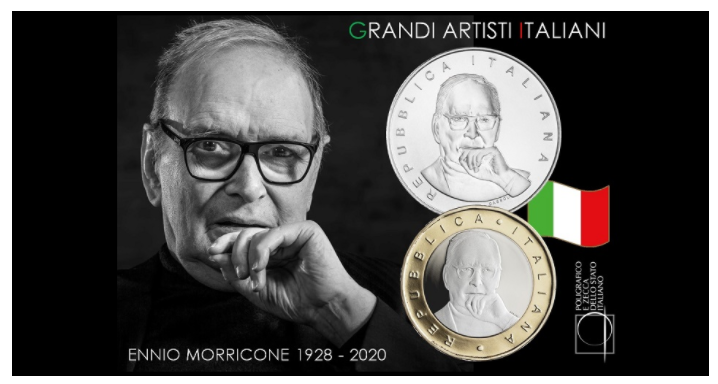 The Istituto Poligrafico e Zecca dello Stato (IPZS) has issued (16th June) collector coins that pay homage to one of the country’s contemporary musical legends — composer and conductor Ennio Morricone (1928–2020), who became one of the world’s most sought after composers. The coins are issued as part of the numismatic series entitled “Great Italian Artists,” which was begun last year.

Born in Rome, Morricone was the son of Libera Ridolfi and Mario Morricone, a musician who was a professional trumpeter performing in light-music orchestras. It was his father who first taught him to read music and to play several instruments.

Sadly, Ennio Morricone died on the 6th July 2020, after succumbing to a fall at his home in Rome and after being hospitalised. He was 91-years-old. Morricone was survived by his wife of nearly 70 years, Maria Travia, whom he had met in 1950, as well as the couple’s three sons and one daughter, along with their families. It was Travia who wrote lyrics to complement her husband’s pieces, her works include the Latin texts for The Mission. During his musical career, which spanned over seven decades, Morricone sold well over 70 million records worldwide. This included 6.5 million albums and singles in France, over three million in the United States, and in 1971 he received his first golden record — the disco d’oro — for the sale of 1,000,000 records in his native Italy. Morricone also received the Targa d’Oro for worldwide sales of 22 million single recordings.

Designed by Maria Angela Cassol, the obverse side on both the 16-sided bi-metallic and round silver versions includes an image of Morricone which is based on a photograph believed to have been taken when the composer was in his late 80s. Placed around the image of Morricone is the text REPUBBLICA ITALIANA with the name of the designer CASSOL placed just under his image.

The reverse side depicts a reproduction of the hands of the Maestro in the act of conducting. Around the primary design is the inscription ENNIO MORRICONE, and above is the value 5 EURO. To the right of the design is the letter R, which identifies the Mint of Rome, and the year of the coin’s issue, 2021.

The silver versions are encapsulated and presented in custom IPZS-branded case, accompanied by a certificate of authenticity. The Proof-quality bi-metallic coins are presented in a sealed blister-type coin-card with the specifications shown on the reverse side.