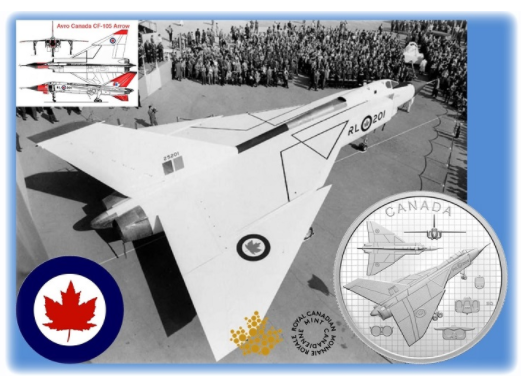 The Royal Canadian Mint has released new collector silver Proof coins which remember the legacy of the AVRO CF-105 Arrow, an aviation marvel that was designed and built in Canada. The reverse design, in particular, salutes the innovators whose ideas provided the blueprint for the Arrow’s achievements.

Despite the promise of developing supersonic aircraft and Canada signing an agreement with the United States in which they became a partner in NORAD (North American Air Defense), the AVRO programme had come under pressure from the Diefenbaker government, which came to power in June 1957, to cease operations. The abrupt cancellation of the AVRO project came to an abrupt end on the 20th February 1959, when the government cited the project was too costly to proceed further, despite the advent of the missile age.

The reverse design is inspired by technical drawings of the AVRO Arrow and features laser-engraved grid lines for a classic blueprint look, emphasising the task of having produced the most advanced fighter jet of its time. Designed by Canadian artist Stephen Quick, the reverse side of these coins features a mix of a cross-sectional plan and three-view drawings, while the rendering of the Arrow in perspective shows the beauty of the aircraft’s design.

To complete the blueprint look, laser-engraved grid lines fill the field on both the reverse and obverse, the latter of which features the effigy of Her Majesty Queen Elizabeth II created by Susanna Blunt. The denomination of 20 DOLLARS is placed below the Queen’s image.

Each coin is encapsulated and presented in a Royal Canadian Mint-branded custom case accompanied by a numbered certificate of authenticity. For more information about this coin, please visit their website.