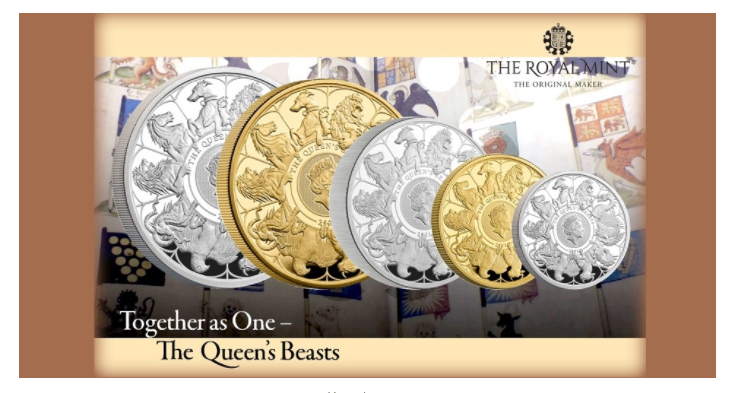 The Royal Mint has released (29th April) a series of gold, silver, and base metal coins in tribute to the immense success and popularity of the “Queen’s Beasts” series. Initially launched as a bullion series in 2016, the coin designs and concept transitioned nicely onto a collector’s edition in 2017 with the Lion of England launching the series of Proof-quality gold and silver coins. This year, the last of the beasts were released with the Griffin of Richard III, which completed the entire 10-coin set. The project became a firm favourite for coin collectors around the world and with investors who purchased the bullion versions.

The Queen’s Beasts Collection has showcased the history and symbolism of each of these creatures both real and mythical in turn. The Queen’s Beasts and their design holds centuries-old connections to heraldry and the symbolism associated with crests and their meaning from illustrious families and dynasties in history. The series itself was inspired by the 10 beasts created in time for the coronation of HM Queen Elizabeth II in June 1953. The beasts were crafted in plaster and over six feet high, which lined the path of the Queen at Westminster Abbey.

In tribute to and as a means of highlighting the designs of the beasts, as well as showcasing the craftsmanship of the Royal Mint’s engravers and technological abilities, a “masterwork” in gold has been minted. Setting a new standard for minting and combining centuries-old techniques with innovative technology, the Royal Mint has created a unique and beautiful work of art, and the largest-ever coin they have produced.

The coin was created by this team of master craftspeople at the Royal Mint, using both traditional minting skills alongside innovative technology. Modern techniques were called upon in the beginning, with engraving machines being used to carefully cut the design onto the coin. The spectacular result is a pure gold coin with a weight of 10 kilograms, a diameter of 20 centimetres, and a face value of £10,000 that meticulously depicts all 10 designs of the Queen’s Beasts released over a five and six-year timeframe.

The complete line-up of coronation beasts on commemorative coins is now complete and the celebrations continue with a special coin reuniting all 10 beasts in one design. Presented together on one coin, these magnificent royal guardians — lions, a griffin, a falcon, a bull, a yale, a greyhound, a dragon, a unicorn, and a horse — surround the effigy of Her Majesty The Queen. Each illustration of the beasts included in the series is the work of acclaimed coin designer Jody Clark, who was the youngest designer to have created a definitive coinage portrait of Her Majesty The Queen, and introduced it onto British coinage in 2015. Clark’s work can now be seen on both sides of one coin, a rare position as a modern coin designer.

These new commemoratives also include an effigy on the reverse which the beasts are arranged around and which is the same likeness of the Queen shown on the obverse. The text above the Queen’s likeness reads THE QUEEN’S BEASTS and the year of issue 2021 is shown below her portrait. Each depiction of the Queen’s Beasts shown on the reverse side of the latest commemoratives appeared on their own coin from 2016 to 2021.

The one-kilo, 10-ounce, five-ounce, and one-ounce silver Proof-quality coins are encapsulated and presented in a selection of custom cases according to their size and accompanied by a certificate of authenticity and informative booklet.

The gold two-kilo, one-kilo, five-ounce, and one-ounce Proof-quality coins are encapsulated and presented in a selection of custom polished hardwood cases and accompanied by a certificate of authenticity and informative booklet.

The Royal Mint recommends calling for an up to date price and availability for the unique, largest-ever coin their facilities have produced. At the current gold spot, the coin’s intrinsic value alone is almost $570,000.