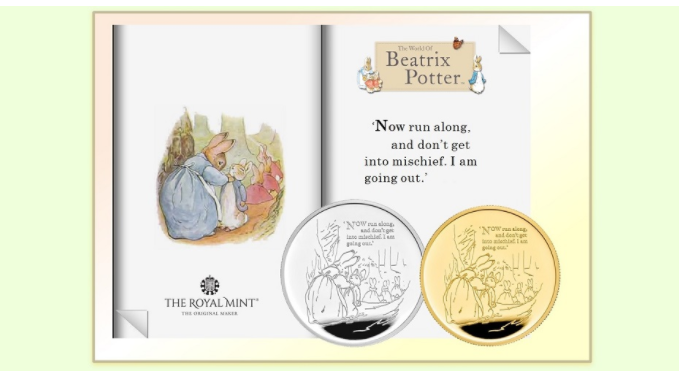 The Royal Mint has released (26th April) new gold and silver Proof-quality crown coins which feature one of the most endearing children’s characters written by 19th-century English author Beatrix Potter. The new release follows on from the huge success of Peter Rabbit and his friends, who previously appeared on a series of 50-pence commemorative coins, and they have since become one of the most popular coin collections produced by the Royal Mint. Now, the iconic character has hopped over to a new coin format and has been depicted on the reverse of new £5 cupro-nickel crowns as well as silver and gold one-ounce Proof quality coins. The commemorative £5 Brilliant Uncirculated crown and one-ounce gold and silver coins are released in a partnership secured with Penguin Random House, custodians of the Peter Rabbit legacy.

Born in the affluent London borough of Kensington into a family of privilege, as a means of earning pocket money, Beatrix and her younger brother Walter would print cards of their own design for Christmas and other special occasions. Mice and rabbits were the most frequent subjects of her fantasy paintings as a young girl, and these served as the inspirations for her later works and characters. Since the first stories debuted in 1902 with “The Tale of Peter Rabbit,” Potter has delighted generations of children worldwide with such unforgettable characters as Peter Rabbit, Jemima Puddle-duck, Flopsy, Mopsy, and Cottontail — to name but a few. Peter’s exploits with his friends and family were included in five more stories appearing from 1904 to 1912. The legacy of Peter Rabbit was bequeathed by Potter to the publishing House of Frederick Warne & Co., who published her works. The company was bought by Penguin Books in 1983 and are known as Penguin Random House.

The coins are designed by Royal Mint graphic artist Ffion Gwillim, who has created her design using original storybook illustrations, settling on an image showing the whole Rabbit family together. The new commemorative coin features a charming scene of the Rabbit family from an early part of the story when Peter’s mother warns him not to get into any mischief. The text ‘Now run along, and don’t get into mischief. I am going out’ is placed above the illustration of Peter and his mother.

The obverse bears the fifth definitive effigy of HM Queen Elizabeth II designed by engraver Jody Clark and seen on all British circulation and commemorative coinage since 2015. The denomination of 5 POUNDS (Brilliant Uncirculated crown), 2 POUNDS (silver), or 100 POUNDS (gold) is part of the legend encircling the Queen’s likeness.